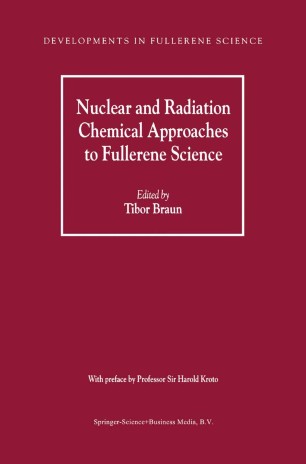 Preface by Sir Harold W. Kroto, FRS
Although the discovery of C60 is now almost 15 years old and the extraction occurred 60 nearly ten years ago it is amazing that the range of spin-off research still seems to expand without limits. The birth of the Fullerenes has spawned fascinating research programmes in almost every area of chemistry and physics and this monograph explores a particularly interesting and important area - the behaviour of these pure carbon cages in the presence of high-energy radiation. The C molecules must also be in the space 60 between the stars (albeit in quantities too small to detect at this time) as the conditions in the atmospheres of some carbon stars appear to be almost identical to the plasmas generated in the Kratschmer-Huffman system for making C60. The conditions in space 60 are very varied as it is pervaded by a plethora of high-energy particles (photons, cosmic rays, etc.) and the chapters in this book discuss, among other things, the response of C60 and various derivatives to probing by a range of high-energy particles.
Various fullerenes and fullerene salts have been examined by positron annihilation techniques, revealing details of their electronic and structural properties as well as phase transition behaviour. Muons have been implanted to enable mSR techniques to probe with high sensitivity the endohedral electronic structures of fullerenes including those in superconducting systems.
Mossbauer spectroscopy can give valuable information about the interactions in certain types of organometallic complexes and in particular it can reveal the degree of charge transfer in endohedral species. Nuclear irradiation/radiochemical analytical techniques have been applied resulting in information ranging widely from the stability of the fullerene cage containing endohedral metal atoms in various oxidation states to pharmaceutical studies of the distribution of fullerenes in the internal organs of animals.
Time resolved pulsed radio lysis provides information at high sensitivity enabling micromolar concentrations to be probed e.g. C60 in water in which it is almost insoluble! Redox and rate constant measurements have given useful information on photolytically generated radical ion pairs involving a variety of fullerenes. Interesting accounts of observations involving the production of rare gas endohedral species by nuclear recoil have revealed information about the recoil mechanism.
From the first moment of its discovery the unique cage structure of C60 initiated thoughts about the interesting possibility of encapsulation of atoms and molecules. One possibility that immediately suggested itself was the isolation of chemically toxic radionuclides by encapsulation in the (supposedly chemically innocuous) cage for pharmaceutical purposes. The possibility of creating cages carrying a radioactive atom inside the cage and moieties outside with molecular recognition capabilities is a most exciting prospect and discussion is included of some important first steps aimed at achieving this fascinating breakthrough.
Another problem dealt with in this monograph is the effect of elemental impurities which has, as our studies progress, become more and more a matter of concern and interest. Impurities can have important effects on the observed physical and chemical behaviour of fullerenes, especially when very sensitive probe techniques are applied.
This valuable book reviews some detailed studies of fundamental properties of fullerenes, which are leading to a deeper understanding of their behaviour in the presence of high energy radiation. The information obtained already and that which will be garnered in future studies of the kind described here is an absolutely necessary prerequisite for success in applications.