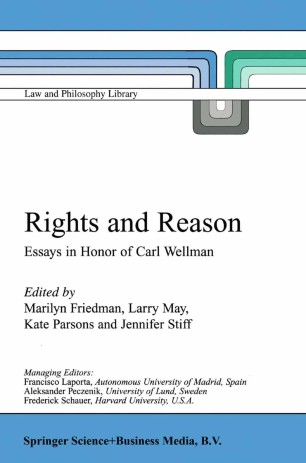 Essays in Honor of Carl Wellman

The papers in this book have been collected in celebration of Carl Wellman, who, after forty-five years, is retiring from teaching. Here I would like to highlight a few of the moments which have shaped Carl as a person and a philosopher. Although his childhood was not unhappy, Carl faced considerable challenges growing up in Manchester, New Hampshire. He ne ver knew his father; he and his mother, Carolyn, had little money; and he fought a long battle with Stevens-Johnson Syndrome, an illness which made hirn more familiar with hospitals than any young person should be. (His mother once told me that there were times when the doctors put Carl in his own hospital room because, while he was too young to be housed with adult men, they did not want the other children to see hirn die. ) Following a year of physician-prescribed rest after high school, the doctors recommended the University of Arizona in the misguided hope that the desert climate might improve his health. In spite of the doctors' hopes, life in Tucson was not easy. The heat takes its toll on everyone, but the desert was especially oppressive for Carl since his unusually sensitive eyes were no match for the intense sun. Still, Carl enjoyed college.