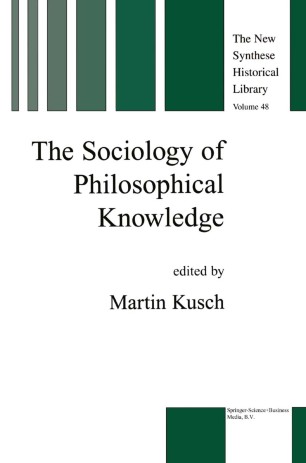 The Sociology of Philosophical Knowledge

This volume brings together a number of authors that see themselves as contribu­ tors to, or critical commentators on, a new field that has recently emerged within the sociology of knowledge. This new field is 'the Sociology of Philosophical Knowledge' (SPK). Studying philosophers and their knowledge from broadly sociological or political perspectives is not, of course, a recent phenomenon. Marxist writers have used such perspectives throughout the twentieth century, and, since the sixties, feminist authors have also occasionally engaged in sociological analysis of philosophers' texts. What distinguishes SPK from these sociologies is that SPK is not engaged in a political struggle; indeed, SPK remains, in general, neutral with respect to the truth or falsity of the doctrines it studies. In doing so, SPK follows the 'strong programme' in the sociology of scientific knowledge. In 'Wittgenstein as a Conservative Thinker', David Bloor draws on the work of the sociologist Karl Mannheim in order to situate Wittgenstein's philosophy. Mannheim distinguished between two important styles of thought in the nine­ teenth century. The first, the 'natural law' ideology was associated with ideas of the Enlightenment and the French Revolution. It emphasized individualism, progress, and universal reason. The second style of thought was 'conservatism'.