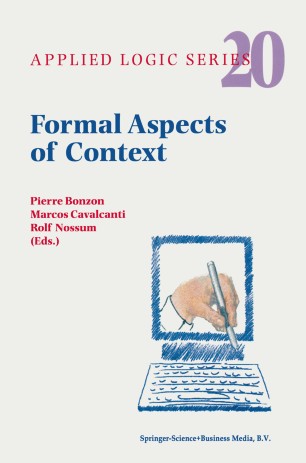 We welcome Volume 20, Formal Aspects of Context. Context has always been recognised as strongly relevant to models in language, philosophy, logic and artifi­ cial intelligence. In recent years theoretical advances in these areas and especially in logic have accelerated the study of context in the international community. An annual conference is held and many researchers have come to realise that many of the old puzzles should be reconsidered with proper attention to context. The volume editors and contributors are from among the most active front-line researchers in the area and the contents shows how wide and vigorous this area is. There are strong scientific connections with earlier volumes in the series. I am confident that the appearance of this book in our series will help secure the study of context as an important area of applied logic. D.M.Gabbay INTRODUCTION This book is a result of the First International and Interdisciplinary Con­ ference on Modelling and Using Context, which was organised in Rio de Janeiro in January 1997, and contains a selection of the papers presented there, refereed and revised through a process of anonymous peer review. The treatment of contexts as bona-fide objects of logical formalisation has gained wide acceptance in recent years, following the seminal impetus by McCarthy in his 'lUring award address.