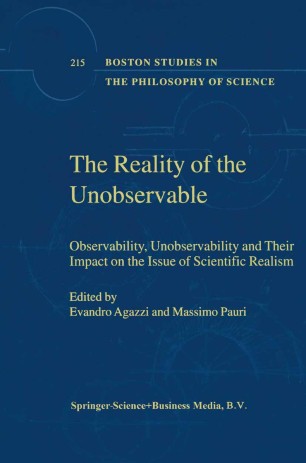 The Reality of the Unobservable

Observability, Unobservability and Their Impact on the Issue of Scientific Realism

Part of the Boston Studies in the Philosophy of Science book series (BSPS, volume 215)

Observability and Scientific Realism It is commonly thought that the birth of modern natural science was made possible by an intellectual shift from a mainly abstract and specuJative conception of the world to a carefully elaborated image based on observations. There is some grain of truth in this claim, but this grain depends very much on what one takes observation to be. In the philosophy of science of our century, observation has been practically equated with sense perception. This is understandable if we think of the attitude of radical empiricism that inspired Ernst Mach and the philosophers of the Vienna Circle, who powerfully influenced our century's philosophy of science. However, this was not the atti tude of the f ounders of modern science: Galileo, f or example, expressed in a f amous passage of the Assayer the conviction that perceptual features of the world are merely subjective, and are produced in the 'anima!' by the motion and impacts of unobservable particles that are endowed uniquely with mathematically expressible properties, and which are therefore the real features of the world. Moreover, on other occasions, when defending the Copernican theory, he explicitly remarked that in admitting that the Sun is static and the Earth turns on its own axis, 'reason must do violence to the sense' , and that it is thanks to this violence that one can know the tme constitution of the universe.