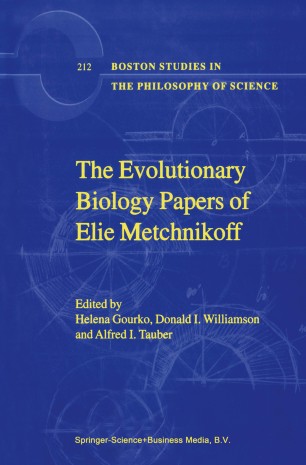 Part of the Boston Studies in the Philosophy of Science book series (BSPS, volume 212)

Elie Metchnikoff (1845-1916), winner of the Nobel Prize in 1907 for his contributions to immunology, was first a comparative zoologist, who, working in the wake of Darwin's On the Origin of Species, made seminal contributions to evolutionary biology. His work in comparative embryology is best known in regard to the debates with Ernst Haeckel concerning animal genealogical relationships and the theoretical origins of metazoans. But independent of those polemics, Metchnikoff developed his `phagocytosis theory' of immunity as a result of his early comparative embryology research, and only in examining the full breadth of his work do we appreciate his signal originality. Metchnikoff's scientific papers have remained largely untranslated into English. Assembled here, annotated and edited, are the key evolutionary biology papers dating from Metchnikoff's earliest writings (1865) to the texts of his mature period of the 1890s, which will serve as an invaluable resource for those interested in the historical development of evolutionary biology.