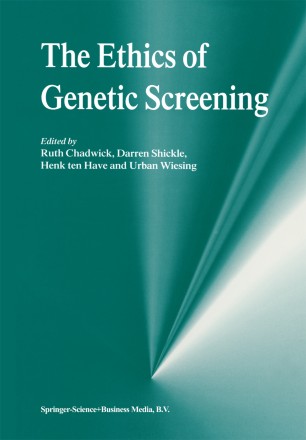 The Ethics of Genetic Screening

This collection of essays represents the work produced in the course of a three-year project funded by the Commission of the European Communities under the Biomed I programme, on the ethics of genetic screening, entitled 'Genetic screening: ethical and philosophical perspectives, with special reference to multifactorial diseases'. The short title of the project was Euroscreen, thereafter known as Euroscreen I, in the light of the fact that a second project on genetic screening was subsequently funded. The project was multinational and multidisciplinary, and had as its objectives to examine the nature and extent of genetic screening programmes in different European countries; to analyse the social policy response to these developments in different countries; and to explore the applicability of normative ethical frameworks to the issues. The project was led by a core group who had oversight of the project and members of which have acted as editors for this volume. Darren Shickle edited the first section; Henk ten Have the second; Ruth Chadwick and Urban Wiesing the third and final part. The volume opens with an overview of genetic screening and the principles available for addressing developments in the field, with special reference to the Wilson and Jungner principles on screening. The first of the three major sections thereafter includes papers on the state of the art in different countries, together with some analysis of social context and policy.