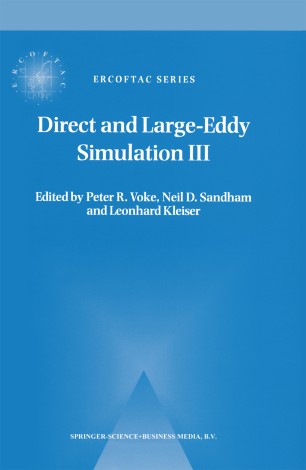 The practical importance of turbulence led the U.K. Royal Academy of Engineering to launch an Initiative on Turbulence, the most important outcome of which was the definition and agreement of the 1999 Newton Institute Research Programme on Turbulence. The main aim of the- month programme, held at the institute in Cambridge, was to bring together the mathematics and engineering communities involved in the turbulence area to address the many problems and to map out future strategy. As a part of the Research Programme, a Symposium on Direct and Large-Eddy Simulation was jointly organised with ERCOFfAC through their Large-Eddy Simulation Interest Group and took place in May 1999. Two previous ERCOFf AC Workshops had already taken place on these closely related varieties of turbulence simulation, at The University of Surrey in 1994 and at Universite Joseph Fourier, Grenoble in 1996. The Symposium at Cambridge was therefore the third in the ERCOFTAC series, enhanced by the presence of leading figures in the field from Europe and the USA who were resident at INI for that period of the Research Programme. Professors M. Germano, A. Leonard, J. Jimenez, R. Kerr and S. Sarkar gave the invited lectures, text versions of which will be found in this volume. As occurred at the previous two ERCOFT AC workshops, there were almost one hundred participants mostly from Europe but including some from Japan and the USA, including on this occasion resident scientists of the INI Research Programme.

`Overall, this book provides valuable information concerning the current state of research on turbulence modeling. I recommend it for everyone working in the field of turbulence, and computational hydrodynamics. This is a book which should be in every physics library (and, of course, in every geophysics library.'
Pure and Applied Geophysics, Vol.158, 2001