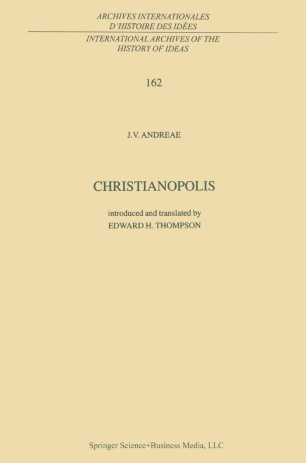 Johann Valentin Andrere (1586-1654) was a multi-faceted product of late­ Reformation Germany. A theologian who was firmly committed to the Lutheran confession, he could yet see very c1early the flaws in his church and argue for their reform; without being an ecumenicist in the modern sense, he yet admired many aspects of the society he observed in Calvinist Geneva, and he recognised the outstanding merit of individual Catholic scholars. A linguist and a lover of art and music, he was the friend of scientists and an enthusiastic student of mathematics whö held that science leads both to an appreciation of the wonders of the material world and its rejection in favour of more spiritual concerns. In his satirical writing he could be ironic and flippant, his rhetoric was often laboured and over­ elaborate, but there is no mistaking the sincerity of his outrage at cruelty, inhumanity and injustice. Andrere was optimistic, in that he believed that the corruption and deceit, the luxm. y and deprivation, the hypocrisy, tyranny and sophistry of the age could be transformed in a second reformation; yet there runs through his life a deep-rooted pessimism or depression which makes his willingness to continue the struggle all the more admirable. As early as 1618, while still a young deacon at the beginning of his career, he defined the four ages of l human life as terror, error, labor and horror.