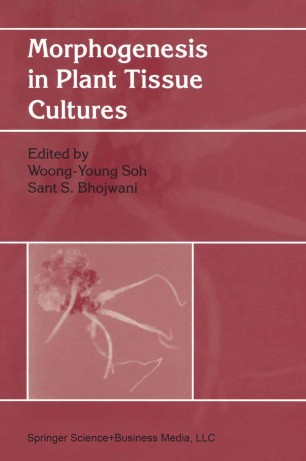 ! Morphogenesis, or developmental morphology, is a dynamic process! and a fascinating field of investigation. Since the beginning of this century plant morphologists (Eames, 1961), anatomists (Eames and Macdaniels, 1947) and embryologists (Maheshwari, 1950) have studied the processes of development and differentiation by observing whole plants and their histological preparations and have generated a wealth of information on the structural changes associated with various developmental stages in the life cycle of a large number of plant species. Around 1940 plant morphogenesis became an experimental field when plant physiologists initiated studies on the effect of treatments, such as application of physiologically active compounds or growth regulators, irradiation, exposure to different day­ length, temperature and injury, on morphological and structural changes. During the past two decades geneticists and molecular biologists have become interested in plant morphogenesis and extensive work is being done to understand the regulation of gene expression during morphogenesis and how the products of genetic information control the developmental processess.