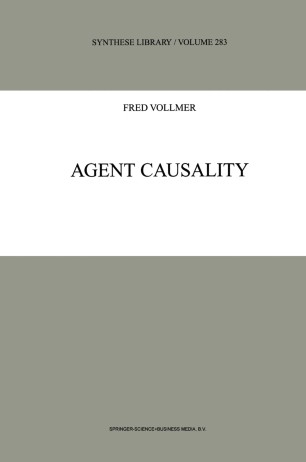 We act for reasons. But, it is sometimes claimed, the mental states and events that make up reasons, are not sufficient conditions of actions. Reasons never make actions happen. We- as agents (persons, selves, subjects) - make our actions happen. Actions are done by us, not elicited by reasons. The present essay is an attempt to understand this concept of agent causality. Who -~ or what - is an agent ? And how - in virtue of what - does an agent do things, or refrain from doing them? The first chapter deals with problems in the theory of action that seem to require the assumption that actions are controlled by agents. Chapters two and three then review and discuss theories of agent cau­ sality. Chapters four and five make up the central parts of the essay in which my own solution is put forth, and chapter six presents some data that seem to support this view. Chapter seven discusses how the theory can be reconciled with neuro-physiological facts. And in the last two chapters the theory is confronted with conflicting viewpoints and phe­ nomena. Daniel Robinson and Richard Swinburne took time to read parts of the manuscript in draft form. Though they disagree with my main viewpoints on the nature of the self, their conunents were very helpful. I hereby thank them both.