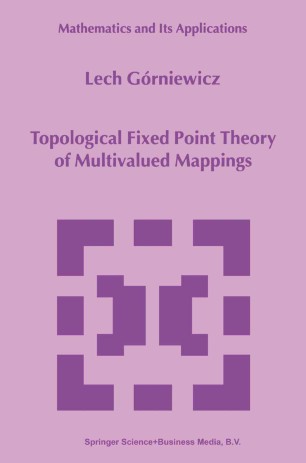 Part of the Mathematics and Its Applications book series (MAIA, volume 495)

This book is an attempt to give a systematic presentation of results and meth­ ods which concern the fixed point theory of multivalued mappings and some of its applications. In selecting the material we have restricted ourselves to study­ ing topological methods in the fixed point theory of multivalued mappings and applications, mainly to differential inclusions. Thus in Chapter III the approximation (on the graph) method in fixed point theory of multi valued mappings is presented. Chapter IV is devoted to the homo­ logical methods and contains more general results, e. g. , the Lefschetz Fixed Point Theorem, the fixed point index and the topological degree theory. In Chapter V applications to some special problems in fixed point theory are formulated. Then in the last chapter a direct application's to differential inclusions are presented. Note that Chapter I and Chapter II have an auxiliary character, and only results con­ nected with the Banach Contraction Principle (see Chapter II) are strictly related to topological methods in the fixed point theory. In the last section of our book (see Section 75) we give a bibliographical guide and also signal some further results which are not contained in our monograph. The author thanks several colleagues and my wife Maria who read and com­ mented on the manuscript. These include J. Andres, A. Buraczewski, G. Gabor, A. Gorka, M. Gorniewicz, S. Park and A. Wieczorek. The author wish to express his gratitude to P. Konstanty for preparing the electronic version of this monograph.