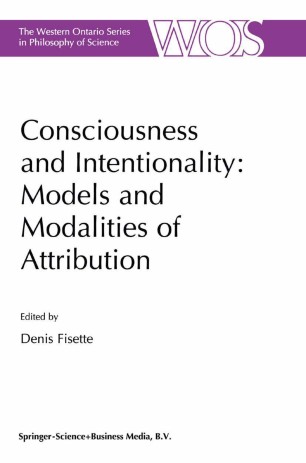 Consciousness and Intentionality: Models and Modalities of Attribution

Part of the The Western Ontario Series in Philosophy of Science book series (WONS, volume 62)

Philosophy of mind has been one of the most active fields in philosophy for the past three decades. One of the most significant factors in the development of this discipline has been the emergence of cognitive science and the interest philosophers have taken in the empirical study of mind. Another equally important factor has been the "naturalistic tum" brought about by W. V. Quine. His proposal that normative epistemology be replaced by empirical psychology marked a radical departure from the Fregean "anti­ psychologism" and "apriorism" that had characterized much of the analytic tradition in philosophy. But while Quine's program of naturalization called the attention of philosophers to empirical psychology, his conception of psychology was inspired by an austere behaviorism which shunned the mentalism of intentional psychology in the Brentanian and phenomenological tradition. Thus, while agreeing with Brentano that the "intentional idiom" could not be reduced to that of the natural sciences, Quine argued that it is of a piece with the indeterminacy of translation. Most contributors of this col­ lection share the cognitivist stance and believe that the mind needs to be explained rather than eliminated. Three main questions are actually confronting current philosophers of mind, each addressed by one or another of the contributors to the present collection.