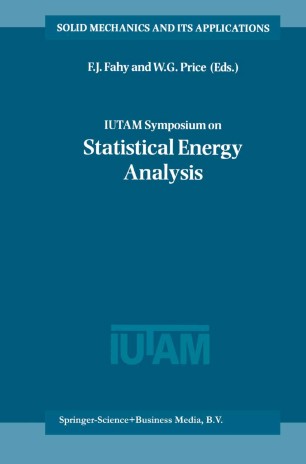 Part of the Solid Mechanics and Its Applications book series (SMIA, volume 67)

This volume is a record of the proceedings of the Symposium on Statistical Energy Analysis (SEA) held at the University of Southampton in July 1997 which was held under the auspices of the International Union of Theoretical and Applied Mechanic~. Theoretical SEA is form of modelling the vibrational and acoustical behaviour of complex mechanical systems which has undergone a long period of gestation before recent maturation into a widely used engineering design and analysis tool which is supported by a rapidly growing supply of commercial software. SEA also provides a framework for associated experimental measurement procedures, data analysis and interpretation. Under the guidance of the members of a distinguished International Scientific Committee, participants were individually invited from the broad spectrum of 'SEAfarers', including academics, consultants, industrial engineers, software developers and research students. The Symposium aimed to reflect the balance of world-wide activity in SEA, although some eminent members of the SEA community were, sadly, unable to attend. In particular, Professor Richard Lyon and Dr Gideon Maidanik, two of the principal originators of SEA, were sorely missed. This publication contains copies of all the papers presented to the Symposium together with a summary of the associated discussions which contains valuable comments upon the contents of the formal papers together with the views of participants on some fundamental issues which remain to be resolved.