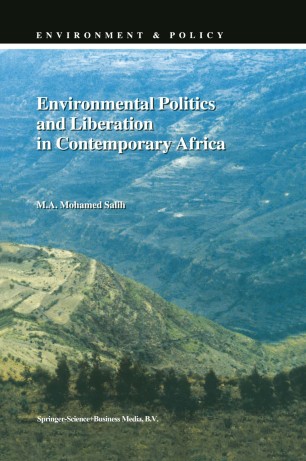 Nowadays, the environment looms large in the analysis of conflict in developing societies, and the precise role it plays is the subject of an ongoing debate. The de­ bate has moved on from the earlier, but still popular, notions of 'power struggles', 'class struggles' and 'ethnic conflicts', to a perception of conflict as the product of intense group competition for resources. Where the state controls the distribu­ tion of resources, itself inevitably becomes party to conflicts whose bone of con­ tention is access to state power as the most efficient means of gaining access to resources. The resources in question are social (health, education, transportation, communication, recreation, etc. ) and material (land, water, housing, jobs, con­ tracts, licenses, permits, etc. ). In parts of the world, and especially in Africa, di­ minishing resources and authoritarian state rule exacerbate group competition leading to political confrontation. This is the line I have followed in analysing conflict in the Hom of Africa (Markakis, 1987, 1998). Mohamed Salih's first contribution in this volume is to move the debate a step beyond this line, which can be criticized as unduly materialist. He does it by bringing culture into the realm of resources, not only as a resource in itself, but also as the agency that assigns natural resources their value. Culture thus becomes a contextual element in conflict over resources whose value is culturally deter­ mined.