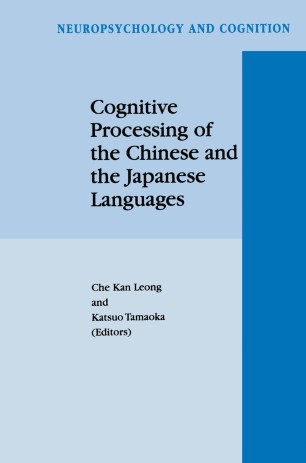 Cognitive Processing of the Chinese and the Japanese Languages

Part of the Neuropsychology and Cognition book series (NPCO, volume 14)

The area of cognitive processing of Chinese and Japanese is currently attracting a great deal of attention by leading cognitive psychologists. They aim to find out the similarities and differences in processing the morphosyllabic Chinese and Japanese syllabary as compared with alphabetic language systems.
Topics under the processing of Chinese include: the use of phonological codes in visual identification of Chinese words, the constraint on such phonological activation, recognition of Chinese homophones, Chinese sentence comprehension and children's errors in writing Chinese characters.
Topics under the processing of Japanese include: the automatic recognition of kanji within an interactive-activation framework, On-reading and Kun-reading of kanji characters, processing differences between hiragana and kanji, the effect of polysemy on katakana script, and the writing behavior of Japanese and non-Japanese speakers.
The interactive-activation model provides the phonologic-orthographic links in processing both language systems.
The present volume should add greatly to our understanding of this topic. Many of the contributors are internationally known for their experimental psychological work.