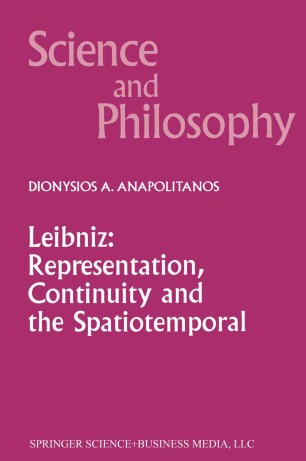 Leibniz: Representation, Continuity and the Spatiotemporal

Part of the Science and Philosophy book series (SCPH, volume 7)

Anapolitanos critically examines and evaluates three basic characteristics of the Leibnizian metaphysical system: Leibniz's version of representation; the principle of continuity; and space, time, and the phenomenally spatio-temporal.
Chapter I discusses representation, especially as it refers to the connection between the real and the phenomenal levels of Leibniz's system. Chapter II examines the principle of continuity, including continuity as a general feature of every level of Leibniz's metaphysics. The position adopted is that the problem of the composition of the continuum played a central role on the development of Leibniz's non-spatial and non-temporal monadic metaphysics. The machinery developed is then used to offer a new interpretation of Leibniz' metaphysics of space and time. The notion of indirect representation is used to construct appropriate models that clarify the nature of the correspondence between the real and the phenomenal levels in the case of the relations `spatially between' and `temporally between', as well as in the cases of spatial and temporal density. Finally, Leibniz's solution to the problem of the continuum is discussed, arguing that it is not entirely satisfactory. A non-anachronistic alternative is proposed, compatible with Leibniz's metaphysics of substance.

`... the interested reader will find this book to be a precious and illuminating tool for tackling Leibniz's philosophical and physico-mathematical ideas.'
Mathematical Reviews, 2000f