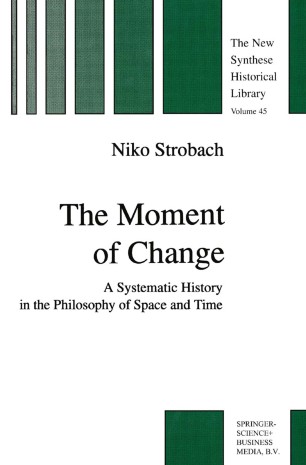 The Moment of Change

A Systematic History in the Philosophy of Space and Time

This book is a systematic history of one of the oldest problems in the philosophy of space and time: How is the change from one state to its opposite to be described? To my knowledge it is the first comprehensive book providing information about and analysis of texts on this topic throughout the ages. The target audience I envisaged are advanced students and scholars of analytic philosophy and the history of philosophy who are interested in the philosophy of space and time. Authors treated in this book range from Plato, Aristotle, the logicians of the late Middle Ages, Kant, Brentano and Russell to contemporary authors such as Chisholm, Hamblin, Sorabji or Graham Priest, taking into account such theories as interval semantics or paraconsistent logic. For the first time, two main questions about the moment of change are explicitly kept apart: Which (if any) of the opposite states does the moment of change belong to? And does it contain an instantaneous event? The texts are discussed within a clear framework of the main systematic options for describing the moment of change, sometimes using predicate logic extended by newly introduced logical prefixes. The last part contains a new suggestion of how to solve the problem of the moment of change. It is centred around a theory of instantaneous states which provides a new solution to Zeno's Flying Arrow Paradox.