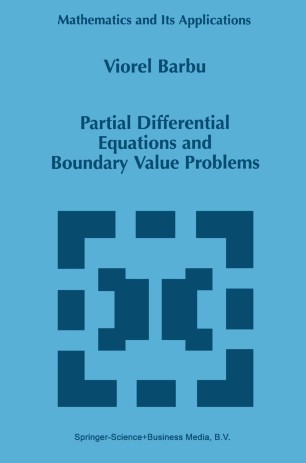 Part of the Mathematics and Its Applications book series (MAIA, volume 441)

The material of the present book has been used for graduate-level courses at the University of Ia~i during the past ten years. It is a revised version of a book which appeared in Romanian in 1993 with the Publishing House of the Romanian Academy. The book focuses on classical boundary value problems for the principal equations of mathematical physics: second order elliptic equations (the Poisson equations), heat equations and wave equations. The existence theory of second order elliptic boundary value problems was a great challenge for nineteenth century mathematics and its development was marked by two decisive steps. Undoubtedly, the first one was the Fredholm proof in 1900 of the existence of solutions to Dirichlet and Neumann problems, which represented a triumph of the classical theory of partial differential equations. The second step is due to S. 1. Sobolev (1937) who introduced the concept of weak solution in partial differential equations and inaugurated the modern theory of boundary value problems. The classical theory which is a product ofthe nineteenth century, is concerned with smooth (continuously differentiable) sollutions and its methods rely on classical analysis and in particular on potential theory. The modern theory concerns distributional (weak) solutions and relies on analysis of Sob ole v spaces and functional methods. The same distinction is valid for the boundary value problems associated with heat and wave equations. Both aspects of the theory are present in this book though it is not exhaustive in any sense.