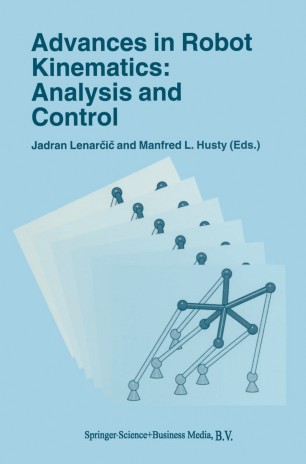 The contributions in this book were presented at the sixth international symposium on Advances in Robot Kinematics organised in June/July 1998 in Strobl/Salzburg in Austria. The preceding symposia of the series took place in Ljubljana (1988), Linz (1990), Ferrara (1992), Ljubljana (1994), and Piran (1996). Ever since its first event, ARK has attracted the most outstanding authors in the area and managed to create a perfect combination of professionalism and friendly athmosphere. We are glad to observe that, in spite of a strong competition of many international conferences and meetings, ARK is continuing to grow in terms of the number of participants and in terms of its scientific impact. In its ten years, ARK has contributed to develop a remarkable scientific community in the area of robot kinematics. The last four symposia were organised under the patronage of the International Federation for the Theory of Machines and Mechanisms -IFToMM. interest to researchers, doctoral students and teachers, The book is of engineers and mathematicians specialising in kinematics of robots and mechanisms, mathematical modelling, simulation, design, and control of robots. It is divided into sections that were found as the prevalent areas of the contemporary kinematics research. As it can easily be noticed, an important part of the book is dedicated to various aspects of the kinematics of parallel mechanisms that persist to be one of the most attractive areas of research in robot kinematics.