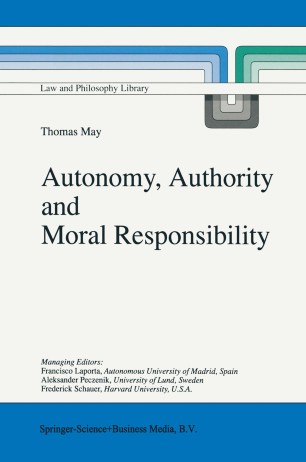 Questions about the relationship between autonomy and authority are raised in nearly every area of moral philosophy. Although the most ob­ vious of these is political philosophy (especially the philosophy of law), the issues surrounding this relationship are by no means confined to this area. Indeed, as we shall see as this work progresses, the issues raised are central to moral psychology, religion, professional ethics, medical ethics, and the nature of moral systems generally. Although the title of this work is Autonomy. Authority and Moral Responsibility. we shall be concerned with the more general question about the relationship between autonomy (or self-direction) and exter­ nal influences, which I take to be any guide to behavior whose presence, content or substance is dependent upon something beyond the control of the agent. Something is beyond the control of the agent if the agent cannot determine whether or not it is present, what its content consists of, or whether or not (or in what way) it influences her. These "external" influences may include (but are not necessarily limited to) religious con­ victions (which guide behavior according to a doctrine whose content is established independently of the agent); moral obligations (which re­ quire action in accordance with some moral theory); and desires for ob­ jects or states of affairs whose presence (or absence) is beyond the con­ trol of the agent. Of course, external influences may also include the requirements of authority or law.