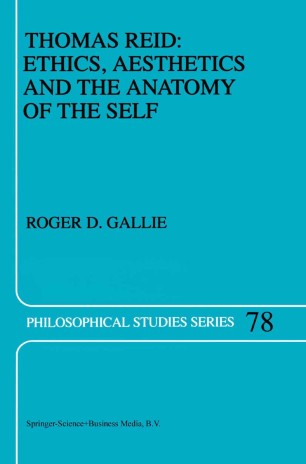 Thomas Reid: Ethics, Aesthetics and the Anatomy of the Self

I: BIOGRAPHICAL SKETCH OF REID Thomas Reid (1710-96) was born at Strachan in Kincardineshire, Scotland, not far from Aberdeen. Reid was fortunate in his family connections. For instance his mother's brother was David Gregory, Savilian professor of Astronomy at Oxford and close friend of Sir Isaac Newton. Reid entered Marischal College, Aberdeen, at the age of twelve after the usual spell in Aberdeen Grammar School. After a short period as college librarian he married his cousin Margaret Gregory, having gained the position of (Presbyterian) minister at New Machar, in the gift of King's College, Aberdeen, which he held from 1737 till 1752. Although Reid published only one paper, An Essay on Quantity, in this period he was far from intellectually idle; for one thing he familiarised himself with the works of Bishop Butler, especially The Analogy of Religion, which, together with those of Samuel Clarke and Isaac Newton, were to have a profound influence on his mature philosophy. In 1752 Reid was appointed a regent at King's College, Aberdeen. During his regency he not only founded a crucially important discussion group, 'The Wise Club', and familiarised himself with David Hume's A Treatise of Human Nature both through his own reading and by exhaustive discussion of it within the group; he also wrote extensively. He composed and delivered his seminal Latin Philosophical Orations.