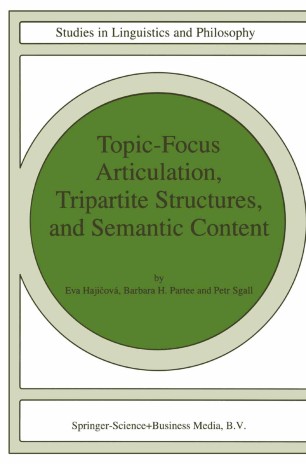 Part of the Studies in Linguistics and Philosophy book series (SLAP, volume 71)

1. 1 OBJECTIVES The main objective of this joint work is to bring together some ideas that have played central roles in two disparate theoretical traditions in order to con­ tribute to a better understanding of the relationship between focus and the syn­ tactic and semantic structure of sentences. Within the Prague School tradition and the branch of its contemporary development represented by Hajicova and Sgall (HS in the sequel), topic-focus articulation has long been a central object of study, and it has long been a tenet of Prague school linguistics that topic-focus structure has systematic relevance to meaning. Within the formal semantics tradition represented by Partee (BHP in the sequel), focus has much more recently become an area of concerted investigation, but a number of the semantic phenomena to which focus is relevant have been extensively investi­ gated and given explicit compositional semantic-analyses. The emergence of 'tripartite structures' (see Chapter 2) in formal semantics and the partial simi­ larities that can be readily observed between some aspects of tripartite structures and some aspects of Praguian topic-focus articulation have led us to expect that a closer investigation of the similarities and differences in these different theoretical constructs would be a rewarding undertaking with mutual benefits for the further development of our respective theories and potential benefit for the study of semantic effects of focus in other theories as well.