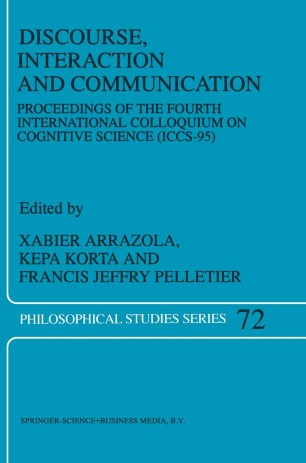 Proceedings of the Fourth International Colloquium on Cognitive Science (ICCS-95)

DISCOURSE, INTERACTION, AND COMMUNICATION Co-organized by the Department of Logic and Philosophy of Science and the Institute for Logic, Cognition, Language, and Infonnation (ILCLI) both from the University of the Basque Country, tlle Fourth International Colloquium on Cognitive Science (ICCS-95) gathered at Donostia - San Sebastian ti'om May 3 to 6, 1995, with the following as its main topics: 1. Social Action and Cooperation. 2. Cognitive Approaches in Discourse Processing: Grammatical and Semantical Aspects. 3. Models of Infonnation in Communication Systems. 4. Cognitive Simulation: Scope and Limits. More tllan one hundred researchers from all over the world exchanged their most recent contributions to Cognitive Science in an exceptionally fruitful annosphere. In this volume we include a small though representative sample of tlle main papers. They all were invited papers except the one by Peter Juel Henrichsen, a contributed paper tllat merited tlle IBERDROLA - Gipuzkoako Foru Aldundia: Best Paper Award, set up in ICCS-95 for the first time.