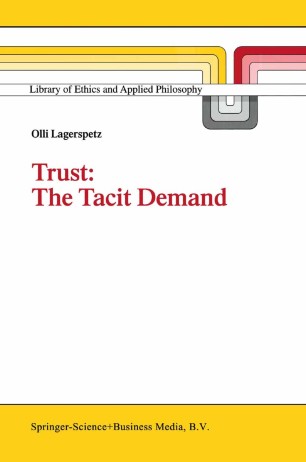 Part of the Library of Ethics and Applied Philosophy book series (LOET, volume 1)

Even though several branches of philosophy meet in the notion of trust, it has nevertheless been largely neglected by mainstream philosophy. Arguably, most existing analyses fail to give a just account of the reality of human experience. The author believes that this is not a coincidence but symptomatic of the irrelevance of received ideas of rationality for crucial areas of human agency. `Individualist' approaches, he argues, can be accused precisely of ignoring fundamental questions about the nature of the individual.
Expanding on the works of Wittgenstein, Winch, and others, in Trust: The Tacit Demand the author demonstrates the conceptual significance of our dependence on others. The discussion stretches over philosophical psychology, epistemology, political philosophy and moral philosophy. The book may be of interest to anyone in philosophy, psychology or the social sciences.