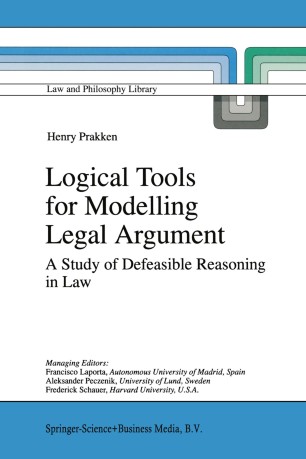 A Study of Defeasible Reasoning in Law

This book is a revised and extended version of my PhD Thesis 'Logical Tools for Modelling Legal Argument', which I defended on 14 January 1993 at the Free University Amsterdam. The first five chapters of the thesis have remained almost completely unchanged but the other chapters have undergone considerable revision and expansion. Most importantly, I have replaced the formal argument-based system of the old Chapters 6, 7 and 8 with a revised and extended system, whieh I have developed during the last three years in collaboration with Giovanni Sartor. Apart from some technical improvements, the main additions to the old system are the enriehment of its language with a nonprovability operator, and the ability to formalise reasoning about preference criteria. Moreover, the new system has a very intuitive dialectieal form, as opposed to the rather unintuitive fixed-point appearance of the old system. Another important revision is the split of the old Chapter 9 into two new chapters. The old Section 9. 1 on related research has been updated and expanded into a whole chapter, while the rest of the old chapter is now in revised form in Chapter 10. This chapter also contains two new contributions, a detailed discussion of Gordon's Pleadings Game, and a general description of a multi-Iayered overall view on the structure of argu­ mentation, comprising a logieal, dialectical, procedural and strategie layer. Finally, in the revised conclusion I have paid more attention to the relevance of my investigations for legal philosophy and argumentation theory.