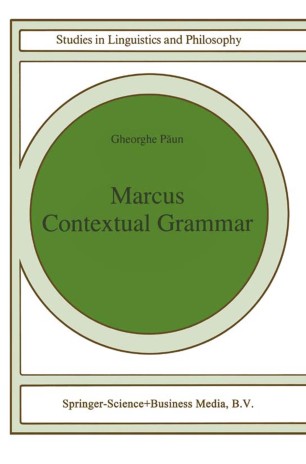 Part of the Studies in Linguistics and Philosophy book series (SLAP, volume 67)

Marcus Contextual Grammars is the first monograph to present a class of grammars introduced about three decades ago, based on the fundamental linguistic phenomenon of strings-contexts interplay (selection). Most of the theoretical results obtained so far about the many variants of contextual grammars are presented with emphasis on classes of questions with relevance for applications in the study of natural language syntax: generative powers, descriptive and computational complexity, automata recognition, semilinearity, structure of the generated strings, ambiguity, regulated rewriting, etc. Constant comparison with families of languages in the Chomsky hierarchy is made. Connections with non-linguistic areas are established, such as molecular computing.
Audience: Researchers and students in theoretical computer science (formal language theory and automata theory), computational linguistics, mathematical methods in linguistics, and linguists interested in formal models of syntax.