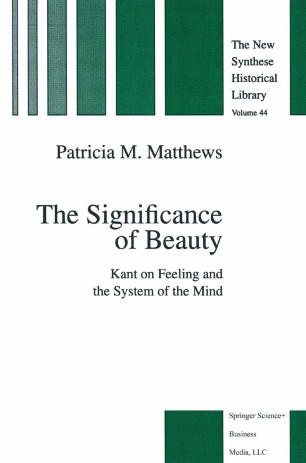 The Significance of Beauty

Kant on Feeling and the System of the Mind

In the Critique of Judgment, Kant argues that feeling is part of the system of the mind. Judgments of taste based on feeling are a unique kind of judgment, and the feeling that is their foundation forms an independent third power of the mind. Feeling has a special role within this system in that it also provides a transition between the other two powers of the mind, cognition and desire.
Matthews argues that feeling, our experience of beauty, provides a transition because it orients humans in a sensible world. Judgments of taste help overcome the difficulties that arise when rational cognitive and moral ends must be pursued in a sensible world. Matthews demonstrates how feeling, disassociated from rational activities in Kant's earlier works, is now central in reaching rational ends and understanding humans as unified rational beings.
Audience: This book would be of interest to research libraries and university libraries, philosophers, historians and aestheticians.