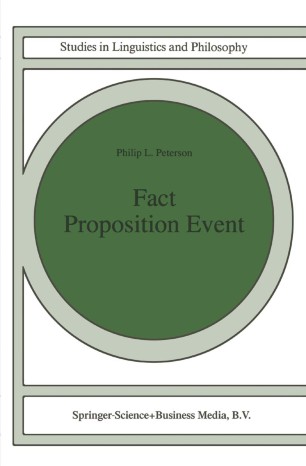 Part of the Studies in Linguistics and Philosophy book series (SLAP, volume 66)

`Peterson is an authority of a philosophical and linguistic industry that began in the 1960s with Vendler's work on nominalization. Natural languages distinguish syntactically and semantically between various sorts of what might be called `gerundive entities' - events, processes, states of affairs, propositions, facts, ... all referred to by sentence nominals of various kinds. Philosophers have worried for millennia over the ontology of such things or `things', but until twenty years ago they ignored all the useful linguistic evidence. Vendler not only began to straighten out the distinctions, but pursued more specific and more interesting questions such as that of what entities the causality relation relates (events? facts?). And that of the objects of knowledge and belief. But Vendler's work was only a start and Peterson has continued the task from then until now, both philosophically and linguistically. Fact Proposition Event constitutes the state of the art regarding gerundive entities, defended in meticulous detail.
Peterson's ontology features just facts, proposition, and events, carefully distinguished from each other. Among his more specific achievements are: a nice treatment of the linguist's distinction between `factive' and nonfactive constructions; a detailed theory of the subjects and objects of causation, which impinges nicely on action theory; an interesting argument that fact, proposition, events are innate ideas in humans; a theory of complex events (with implications for law and philosophy of law); and an overall picture of syntax and semantics of causal sentences and action sentences. Though Peterson does not pursue them here, there are clear and significant implications for the philosophy of science, in particular for our understanding of scientific causation, causal explanation and law likeness.'
Professor William Lycan, University of North Carolina, Chapel Hill