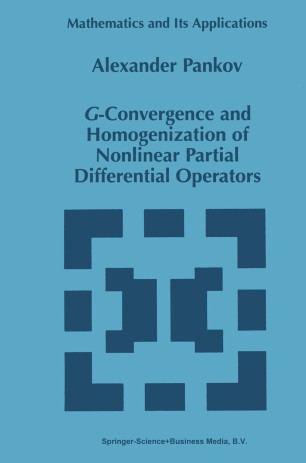 Part of the Mathematics and Its Applications book series (MAIA, volume 422)

Various applications of the homogenization theory of partial differential equations resulted in the further development of this branch of mathematics, attracting an increasing interest of both mathematicians and experts in other fields. In general, the theory deals with the following: Let Ak be a sequence of differential operators, linear or nonlinepr. We want to examine the asymptotic behaviour of solutions uk to the equation Auk = f, as k ~ =, provided coefficients of Ak contain rapid oscillations. This is the case, e. g. when the coefficients are of the form a(e/x), where the function a(y) is periodic and ek ~ 0 ask~=. Of course, of oscillation, like almost periodic or random homogeneous, are of many other kinds interest as well. It seems a good idea to find a differential operator A such that uk ~ u, where u is a solution of the limit equation Au = f Such a limit operator is usually called the homogenized operator for the sequence Ak . Sometimes, the term "averaged" is used instead of "homogenized". Let us look more closely what kind of convergence one can expect for uk. Usually, we have some a priori bound for the solutions. However, due to the rapid oscillations of the coefficients, such a bound may be uniform with respect to k in the corresponding energy norm only. Therefore, we may have convergence of solutions only in the weak topology of the energy space.