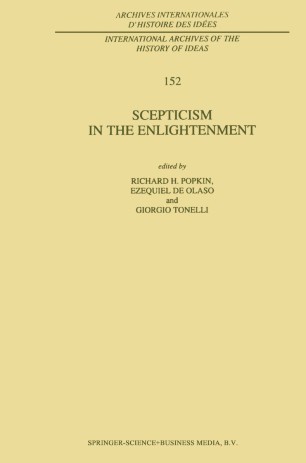 Scepticism in the Enlightenment

Starting with Richard Popkin's essay of 1963, `Scepticism in the Enlightenment', a new investigation into philosophical scepticism of the period was launched. The late Giorgio Tonelli and the late Ezequiel de Olaso examined in great detail the kinds of scepticism developed during the Enlightenment, and the kind of answer to scepticism that was developed by Leibniz. Their original researches and interpretations are of great value and importance. As a result of their work Popkin modified his original claims, as shown in the last two articles in this volume. The book contains an introduction by Popkin and 10 essays, two of which have never been published before. This collection should be of interest to students and scholars of 18th century thought in England, France and Germany.