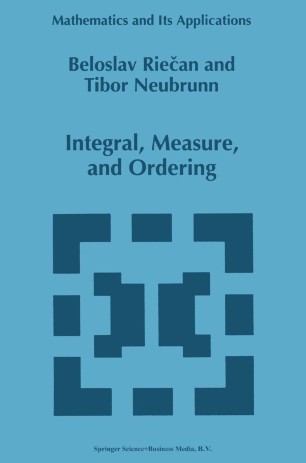 Part of the Mathematics and Its Applications book series (MAIA, volume 411)

The present book is a monograph including some recent results of mea­ sure and integration theory. It concerns three main ideas. The first idea deals with some ordering structures such as Riesz spaces and lattice or­ dered groups, and their relation to measure and integration theory. The second is the idea of fuzzy sets, quite new in general, and in measure theory particularly. The third area concerns some models of quantum mechanical systems. We study mainly models based on fuzzy set theory. Some recent results are systematically presented along with our suggestions for further development. The first chapter has an introductory character, where we present basic definitions and notations. Simultaneously, this chapter can be regarded as an elementary introduction to fuzzy set theory. Chapter 2 contains an original approach to the convergence of sequences of measurable functions. While the notion of a null set can be determined uniquely, the notion of a set of "small" measure has a fuzzy character. It is interesting that the notion of fuzzy set and the notion of a set of small measure (described mathematically by so-called small systems) were introduced independently at almost the same time. Although the axiomatic systems in both theories mentioned are quite different, we show that the notion of a small system can be considered from the point of view of fuzzy sets.