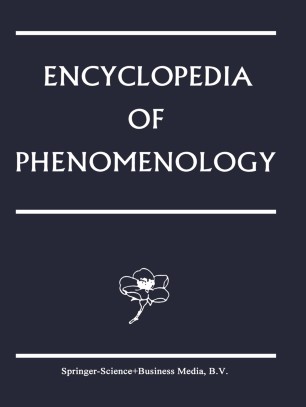 Part of the Contributions to Phenomenology book series (CTPH, volume 18)

This encyclopedia presents phenomenological thought and the phenomenological movement within philosophy and within more than a score of other disciplines on a level accessible to professional colleagues of other orientations as well as to advanced undergraduate and graduate students. Entries average 3,000 words. In practically all cases, they include lists of works "For Further Study." The Introduction briefly chronicles the changing phenomenological agenda and compares phenomenology with other 20th Century movements. The 166 entries are a baut matters of seven sorts: ( 1) the faur broad tendencies and periods within the phenomenological movement; (2) twenty-three national traditions ofphenomenology; (3) twenty-two philosophical sub-disciplines, including those referred to with the formula "the philosophy of x"; (4) phenomenological tendencies within twenty-one non-philosophical dis­ ciplines; (5) forty major phenomenological topics; (6) twenty-eight leading phenomenological figures; and (7) twenty-seven non-phenomenological figures and movements ofinteresting sim­ ilarities and differences with phenomenology. Conventions Concern ing persons, years ofbirth and death are given upon first mention in an entry ofthe names of deceased non-phenomenologists. The names of persons believed tobe phenomenologists and also, for cross-referencing purposes, the titles of other entries are printed entirely in SMALL CAPITAL letters, also upon first mention. In addition, all words thus occurring in all small capital letters are listed in the index with the numbers of all pages on which they occur. To facilitate indexing, Chinese, Hungarian, and Japanese names have been re-arranged so that the personal name precedes the family name.