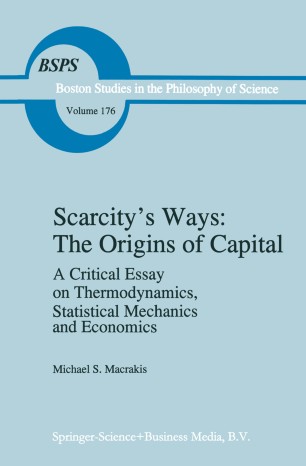 Scarcity’s Ways: The Origins of Capital

A Critical Essay on Thermodynamics, Statistical Mechanics and Economics

Part of the Boston Studies in the Philosophy of Science book series (BSPS, volume 176)

invoking the fluctuation-dissipation theorems of Einstein and 2 more recently those of Callen and Kubo in order to get to manageable results. In this manner, great strides have been made in the development of the many-body problem without reaching the necessity to legitimize thermodynamics. Ther­ modynamics and statistical mechanics were used successful­ ly as bridges and guides to get the new ideas to conform to the macroscopic experiences (measurements). Hence the dis­ 3 interest of theoreticians. The frustration in attracting the at­ tention of the working physicists on this problem is vividly described in Carnap's (1978) account on the reception of his ideas and efforts at the Institute of Advanced Studies at Prin­ ceton where he worked on the Two Essays on Entropy; it al­ most amounted, he thought, to a conspiracy of silence. The priorities of theoretical physicists remain with the puzzles and the cranking at hand: Quantum Field Theory (QFT) and "creation and annihilation" physics, solid state physics, - to mention only a few research areas - command the attention of those working on the research frontiers. Thermodynamics is taken for granted and is thought to be an almost depleted research area. Whatever the subterfuges, the hand-waving arguments, the paedagogical red herrings, the procedures work and nothing can be gained by allocating intellectual re­ sources to resolve ambiguities with few, if any, expected rewards. Down deep, all believe that the regularization of the field will one day be accomplished.