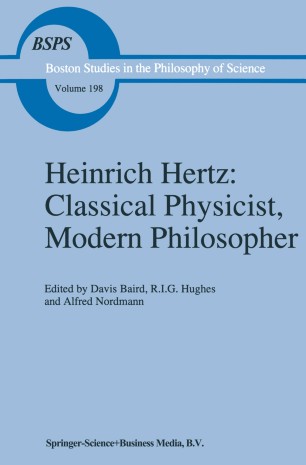 Part of the Boston Studies in the Philosophy of Science book series (BSPS, volume 198)

The sub-title of this symposium is accurate and, in a curious way, promises more than it states: Classical Physicist, Modem Philosopher. Heinrich Hertz, as the con­ summate experimentalist of 19th century technique and as brilliant clarifying critic of physical theory of his time, achieved one of the fulfilments but at the same time opened one of the transition points of classical physics. Thus, in his 'popular' lecture 'On the Relations Between Light and Electricity' at Heidelberg in the Fall of 1889, Hertz identified the ether as henceforth the most fundamental problem of physics, as the conceptual mystery but also the key to understanding mass, electric­ ity, and gravity. Of Hertz's demonstration of electric waves, Helmholtz told the Physical Society of Berlin: "Gentlemen! I have to communicate to you today the most important physical discovery of the century. " Hertz, philosophizing in his direct, lucid, pithy style, once wrote "We have to imagine". Perhaps this is metaphysics on the horizon? In the early pages of his Principles of Mechanics, we read A doubt which makes an impression on our mind cannot be removed by calling it metaphysical: every thoughtful mind as such has needs which scientific men are accustomed to denote as metaphysical. (PM23) And at another place, concerning the terms 'force' and 'electricity' and the alleged mystery of their natures, Hertz wrote: We have an obscure feeling of this and want to have things cleared up.

`... unusually well-balanced anthology ... The editors...are to be congratulated for producing a superb introduction to Hertz scholarship.'
ISIS, 91:1 (2000)