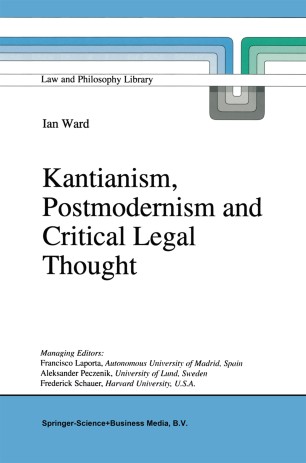 Kantianism, Postmodernism and Critical Legal Thought presents a challenging alternative theory of legal philosophy. The central thesis of the book suggests an accommodation between three of the most influential contemporary theories of law, Kantianism, postmodernism and critical legal thought. In doing so, it further suggests that the often perceived distance between these theories of law disguises a common intellectual foundation. This foundation lies in the work of Immanuel Kant.
Kantianism, Postmodernism and Critical Legal Thought presents an intellectual history of critical legal thinking, beginning with Kant, and then proceeding through philosphers and legal theorists as diverse as Heidegger and Arendt, Foucault and Derrida, Rorty and Rawls, and Unger and Dworkin. Ultimately, it will be suggested that each of these philosophers is writing within a common intellectual tradition, and that by concentrating on the commonality of this tradition, contemporary legal theory can better appreciate the reconstructive potential of the critical legal project.