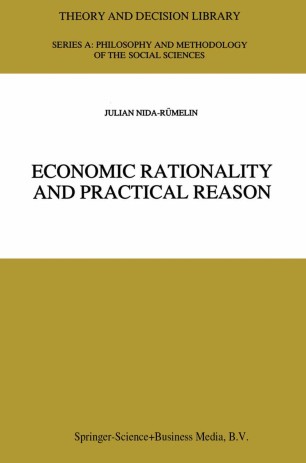 The theory of practical rationality does not belong to one academic discipline alone. There are quite divergent philosophical, economical, sociological, psychological and politological contributions. Sometimes the disciplinary boundaries impede theoretical progress. On the other hand it is an indication for the high complexity of the subject that so many divergent paradigms compete with one another, or - what is worse - live separately in a kind of splendid isolation. Decision theory in the broader sense, embracing the theory of games and collective choice theory, can help to understand practical reason in philosophical analysis. But there are interesting aspects which cannot be dealt with adequately within a decision-theoretic conceptual framework. To have both of these convictions justifies to neglect dis­ ciplinary boundaries and poses a problem for the orthodoxies of either sides. All the essays of this volume focus on the relation between economic rationality and practical reason and discuss different aspects of the same problem, i. e. a basic deficiency in the standard economic theory of practical rationality. But philosophical analysis would not be of much help if it just rejected the economic paradigm. It must rather help to integrate economic aspects into a broader view on practical reason.