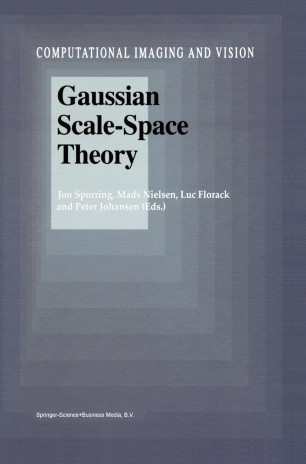 Gaussian scale-space is one of the best understood multi-resolution techniques available to the computer vision and image analysis community. It is the purpose of this book to guide the reader through some of its main aspects. During an intensive weekend in May 1996 a workshop on Gaussian scale-space theory was held in Copenhagen, which was attended by many of the leading experts in the field. The bulk of this book originates from this workshop. Presently there exist only two books on the subject. In contrast to Lindeberg's monograph (Lindeberg, 1994e) this book collects contributions from several scale­ space researchers, whereas it complements the book edited by ter Haar Romeny (Haar Romeny, 1994) on non-linear techniques by focusing on linear diffusion. This book is divided into four parts. The reader not so familiar with scale-space will find it instructive to first consider some potential applications described in Part 1. Parts II and III both address fundamental aspects of scale-space. Whereas scale is treated as an essentially arbitrary constant in the former, the latter em­ phasizes the deep structure, i.e. the structure that is revealed by varying scale. Finally, Part IV is devoted to non-linear extensions, notably non-linear diffusion techniques and morphological scale-spaces, and their relation to the linear case. The Danish National Science Research Council is gratefully acknowledged for providing financial support for the workshop under grant no. 9502164.