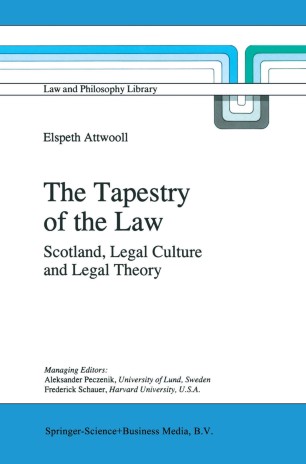 The Tapestry of the Law

Although its concern is jurisprudence, The Tapestry of the Law is intended to offer neither an original theory of or about law nor an account of other people's theories in textbook form. It is, rather, an attempt to approach the subject without following either of these conventions. The reasons are as follows. Those engaged in legal theory are prone to assert that one cannot properly understand the law unless one takes a jurisprudential approach - preferably their own - to it. Equally, those engaged in exposition of the law may counter that legal theory fails to pay adequate attention to actual law. There is at least some truth in these claims. Analyses, courses and textbooks on both sides do often seem to be produced without reference to the other. Yet such isolation is probably more apparent than real. Most, if not all, so-called "black letter" lawyers do operate on the basis of certain jurisprudential understandings, even if these are not articulated ones. In the frequently quoted words ofF C S Northrop: There are lawyers, judges and even law professors who tell us they have no legal philosophy.

` ... a comprehensive survey of trends in twentieth-century jurisprudence ... The Tapestry of Law is clearly intended for a general audience, and on that level it deserves great success. This is an ideal book to offer to anyone curious about the current concerns of English-speaking philosophers of law. Overall, however, the risks Attwooll has taken by writing this sort of book have been fairly taken, and the result is an enjoyable read with plenty of substance.'
Philosophy in Review/Comptes rendus philosophiques (1998)
Buy options