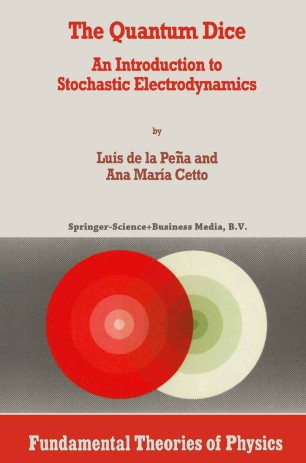 An Introduction to Stochastic Electrodynamics

In spite of the impressive predictive power and strong mathematical structure of quantum mechanics, the theory has always suffered from important conceptual problems. Some of these have never been solved. Motivated by this state of affairs, a number of physicists have worked together for over thirty years to develop stochastic electrodynamics, a physical theory aimed at finding a conceptually satisfactory, realistic explanation of quantum phenomena.
This is the first book to present a comprehensive review of stochastic electrodynamics, from its origins to present-day developments. After a general introduction for the non-specialist, a critical discussion is presented of the main results of the theory as well as of the major problems encountered. A chapter on stochastic optics and some interesting consequences for local realism and the Bell inequalities is included. In the final chapters the authors propose and develop a new version of the theory that brings it in closer correspondence with quantum mechanics and sheds some light on the wave aspects of matter and the linkage with quantum electrodynamics.
Audience: The volume will be of interest to scholars and postgraduate students of theoretical and mathematical physics, foundations and philosophy of physics, and teachers of theoretical physics and quantum mechanics, electromagnetic theory, and statistical physics (stochastic processes).