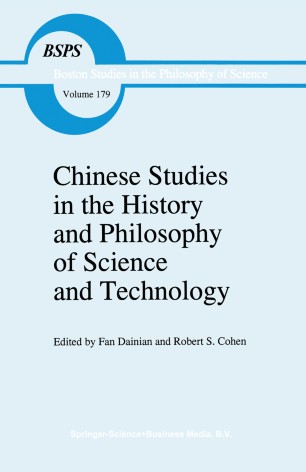 Chinese Studies in the History and Philosophy of Science and Technology

Part of the Boston Studies in the Philosophy of Science book series (BSPS, volume 179)

The articles in this collection were all selected from the first five volumes of the Journal of Dialectics of Nature published by the Chinese Academy of Sciences between 1979 and 1985. The Journal was established in 1979 as a comprehensive theoretical publication concerning the history, philosophy and sociology of the natural sciences. It began publication as a response to China's reform, particularly the policy of opening to the outside world. Chinese scholars began to undertake distinctive, original research in these fields. This collection provides a cross-section of their efforts during the initial phase.
To enable western scholars to understand the historical process of this change in Chinese academics, Yu Guangyuan's `On the Emancipation of the Mind' and Xu Liangying's `Essay on the Role of Science and Democracy in Society' have been included in this collection.
Three of the papers included on the philosophy of science are discussions of philosophical issues in cosmology and biology by scientists themselves. The remaining four are written by philosophers of science and discuss information and cognition, homeostasis and Chinese traditional medicine, the I Ching (Yi Jing) and mathematics, etc.
Papers have been selected on the history of both classical and modern science and technology, the most distinctive of which are macro-comparisons of the development of science in China and the west. Some papers discuss the issue of the demarcation of periods in the history of science, the history of ancient Chinese mathematics, astronomy, metallurgy, machinery, medicine, etc. Others discuss the history of modern physics and biology, the history of historiography of science in China and the history of regional development of Chinese science and technology.
Also included are biographies of three post-eighteenth-century Chinese scholars, Li Shanlan (1811-1882), Hua Hengfang (1833&endash;1902), and Cai Yuanpei (1868&endash;1940), who contributed greatly to the introduction of western science and scholarship to China. In addition, three short papers have been included introducing the interactions between Chinese scholars and three great western scientists, Niels Bohr, Norbert Wiener, and Robert A. Millikan.