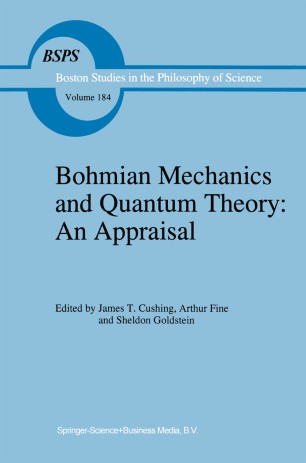 Part of the Boston Studies in the Philosophy of Science book series (BSPS, volume 184)

We are often told that quantum phenomena demand radical revisions of our scientific world view and that no physical theory describing well defined objects, such as particles described by their positions, evolving in a well defined way, let alone deterministically, can account for such phenomena. The great majority of physicists continue to subscribe to this view, despite the fact that just such a deterministic theory, accounting for all of the phe­ nomena of nonrelativistic quantum mechanics, was proposed by David Bohm more than four decades ago and has arguably been around almost since the inception of quantum mechanics itself. Our purpose in asking colleagues to write the essays for this volume has not been to produce a Festschrift in honor of David Bohm (worthy an undertaking as that would have been) or to gather together a collection of papers simply stating uncritically Bohm's views on quantum mechanics. The central theme around which the essays in this volume are arranged is David Bohm's version of quantum mechanics. It has by now become fairly standard practice to refer to his theory as Bohmian mechanics and to the larger conceptual framework within which this is located as the causal quantum theory program. While it is true that one can have reservations about the appropriateness of these specific labels, both do elicit distinc­ tive images characteristic of the key concepts of these approaches and such terminology does serve effectively to contrast this class of theories with more standard formulations of quantum theory.