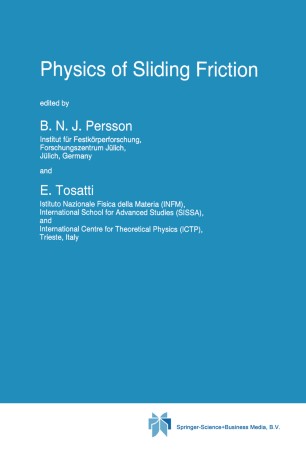 The study of sliding friction is one of the oldest problems in physics, and certainly one of the most important from a practical point of view. Low-friction surfaces are in increasingly high demand for high-tech components such as computer storage systems, miniature motors, and aerospace devices. It has been estimated that about 5% of the gross national product in the developed countries is "wasted" on friction and the related wear. In spite of this, remarkable little is understood about the fundamental, microscopic processes responsible for friction and wear. The topic of interfacial sliding has experienced a major burst of in­ terest and activity since 1987, much of which has developed quite independently and spontaneously. This volume contains contributions from leading scientists on fundamental aspects of sliding friction. Some problems considered are: What is the origin of stick-and-slip motion? What is the origin of the rapid processes taking place within a lub­ at low sliding velocities? On a metallic surface, is the rication layer electronic or phononic friction the dominating energy dissipation pro­ cess? What is the role (if any) of self-organized criticality in sliding friction? How thick is the water layer during sliding on ice and snow? These and other questions raised in this book are of course only part­ ly answered: the topic of sliding friction is still in an early state of development.