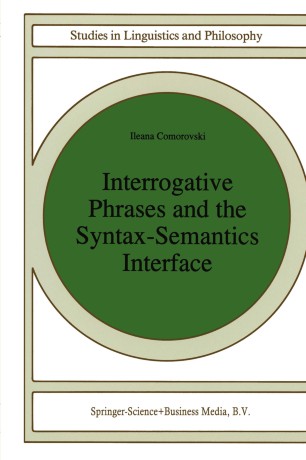 Interrogative Phrases and the Syntax-Semantics Interface

Part of the Studies in Linguistics and Philosophy book series (SLAP, volume 59)

Interrogative Phrases and the Syntax-Semantics Interface starts by analyzing the interpretation of interrogative phrases in single and multiple constituent questions, including their interpretation under adverbs of quantification. The results are then put to work in a novel approach to some of the constraints on dependencies between fronted interrogative phrases and the associated gaps: superiority, weak crossover, as well as the so-called `weak islands' (the WH-island, the negative island and the Factive Island). It is argued that the possibility of fronting an interrogative phrase out of these configurations is determined by a semantic/pragmatic condition on questions, which requires them to be answerable. The analysis is worked out principally on Romanian, a language which allows multiple wh-fronting. The results are then extended to English.
Audience: Researchers and students in syntax, semantics and their interface, as well as linguists studying the relation between the acceptability of sentences and the larger discourse context.