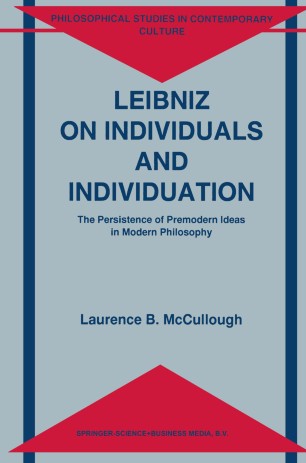 Leibniz on Individuals and Individuation

The Persistence of Premodern Ideas in Modern Philosophy

Leibniz's earliest philosophy and its importance for his mature philosophy have not been examined in detail, particularly in the level of detail that one can achieve by placing Leibniz's philosophy in the context of the sources for two of the most basic concerns of his philosophical career: his metaphysics of individuals and the principle oftheir individuation. In this book I provide for the first time a detailed examination of these two Leibnizian themes and trace its implications for how we should interpret other major Leibnizian themes and for how we should read Leibniz and other philosophers of the sixteenth and later centuries as 'modem' philosophers. Leibniz began his philosophical career more than 300 years ago, a fact that shapes fundamentally my attempt in the pages that follow to come to terms now with the texts that he left us. Leibniz's did not do philosophy in a way wholly congenial to twentieth century philosophical methodologies, especially those that have enjoyed some prominence in recent Anglo-American philosophy. Moreover, as we shall see, Leibniz is not a modem philosopher, when 'modem' is understood to mean making a sharp break with medieval philosophy. Indeed, I shall argue, scholars should discard such terms as 'modem' from historical philosophical scholarship, so that old texts can be allowed to remain old - to stand on their own in and from times now long past.