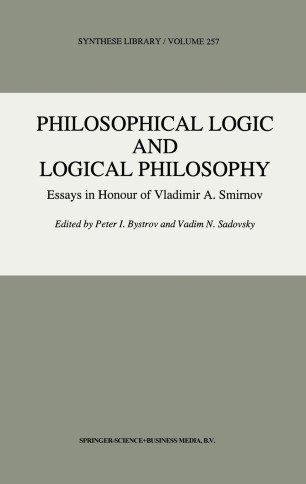 Essays in Honour of Vladimir A. Smirnov

Vladimir Aleksandrovich Smirnov was born on March 2, 1931. He graduated from Moscow State University in 1954. From 1957 till 1961 he was a lecturer in philosophy and logic at the Tomsk University. Since 1961 his scientific activity continued in Moscow at the Institute of Philosophy of Academy of Sciences of the USSR. From 1970 and till the last days of his life V. A. Smirnov was lecturer and then Professor at the Chair of Logic at Moscow State University. V. A. Smirnov played an important role at the Institute of Philosophy of Russian Academy of Sciences being the Head of Department of Epistemology, Logic and Philosophy of Science and Technology, and the Head of Section of Logic. Last years he was the leader of the Centre of Logical Investigations of Russsian Academy of Sciences. In 1990-91 he founded a new non-goverment Institute of Logic, Cognitive Sciences and Development of Personality for performing research, teaching, editorial and organization activity in the field of humanities. At the Department of Philosophy of Moscow State University and at the Institute of Philosophy V. A. Smirnov and his close colleagues have founded a Russian logical school which brought up many talented researchers who work at several scientific centres in various countries.