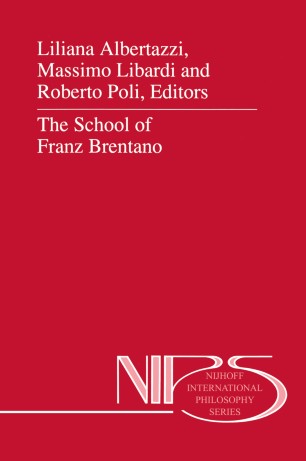 The School of Franz Brentano

The central idea developed by the contributions to this book is that the split between analytic philosophy and phenomenology - perhaps the most impor­ tant schism in twentieth-century philosophy - resulted from a radicalization of reciprocal partialities. Both schools of thought share, in fact, the same cultural background and their same initial stimulus in the thought of Franz Brentano. And one outcome of the subsequent rift between them was the oblivion into which the figure and thought of Brentano have fallen. The first step to take in remedying this split is to return to Brentano and to reconstruct the 'map' of Brent ani sm. The second task (which has been addressed by this book) is to revive inter­ est in the theoretical complexity of Brentano' s thought and of his pupils and to revitalize those aspects that have been neglected by subsequent debate within the various movements of Brentanian inspiration. We have accordingly decided to organize the book into two introductory es­ says followed by two sections (Parts 1 and 2) which systematically examine Brentano's thought and that of his followers. The two introductory essays re­ construct the reasons for the 'invisibility', so to speak, of Brentano and set out of his philosophical doctrine. Part 1 of the book then ex­ the essential features amines six of Brentano's most outstanding pupils (Marty, Stumpf, Meinong, Ehrenfels, Husserl and Twardowski). Part 2 contains nine essays concentrating on the principal topics addressed by the Brentanians.