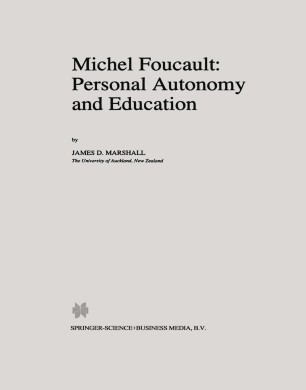 Part of the Philosophy and Education book series (PHED, volume 7)

This book is designed to serve two purposes. First it provides an introduction to the ideas and works of Michel Foucault. It should be particularly appropriate for education students for whom, in general, Foucault is a shadowy presence. Second, it provides a Foucault based critique of a central plank of Western liberal education, the notion of the autonomous individual or personal autonomy. There are several introductions to Foucault but they tend to be written from a particular theoretical position, or with a particular interest in Foucault's ideas and works. For example Smart (1986) and Poster (1984) exemplify the former, and Dreyfus and Rabinow (1983) the latter. There is no substantial work in education on Foucault, apart from Ball (1990), which is an edited collection of papers by educationalists. The writer started reading Foucault from a position in education which was in the liberal framework, somewhere between Dewey, Freire and Habermas, but with an interest in punishment, authority and power. The book is the outcome of several years of trying to introduce students in education to his ideas and works in an educationally relevant manner. But an introduction, on its own, cannot show this relevance to education. Unless his ideas are put to work, unless they are used as opposed to mentioned in some sphere or area of education, then they may be of little relevance.