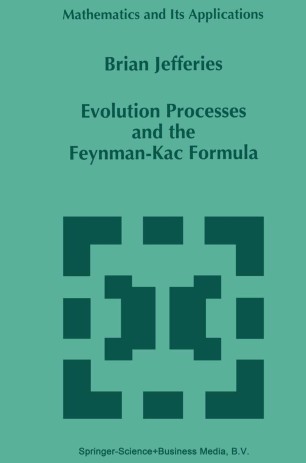 Evolution Processes and the Feynman-Kac Formula

Part of the Mathematics and Its Applications book series (MAIA, volume 353)

This book is an outgrowth of ideas originating from 1. Kluvanek. Unfortunately, Professor Kluvanek did not live to contribute to the project of writing up in a systematic form, the circle of ideas to which the present work is devoted. It is more than likely that with his input, the approach and areas of emphasis of the resulting exposition would have been quite different from what we have here. Nevertheless, the stamp of Kluvanek's thought and philosophy (but not necessarily his approval) abounds throughout this book. Although the title gives no indication, integration theory in vector spaces is a cen­ tral topic of this work. However, the various notions of integration developed here are intimately connected with a specific application-the representation of evolutions by func­ tional integrals. The representation of a perturbation to the heat semigroup in terms of Wiener measure is known as the Feynman-Kac formula, but the term has a wider meaning in the present work. Traditionally, such representations have been used to obtain analytic information about perturbations to free evolutions as an alternative to arguments with a more operator-theoretic flavour. No applications of this type are given here. It is an un­ derlying assumption of the presentation of this material that representations of the nature of the Feynman-Kac formula are worth obtaining, and in the process of obtaining them, we may be led to new, possibly fertile mathematical structures-a view largely motivated by the pervasive use of path integrals in quantum physics.