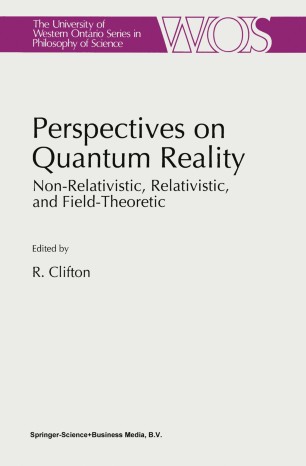 Part of the The University of Western Ontario Series in Philosophy of Science book series (WONS, volume 57)

But to admit things not visible to the gross creatures that we are is, in my opinion, to show a decent humility, and not just a lamentable addiction to metaphysics. J. S. Bell, Are There Quantum Jumps? ON CANADIAN THANKSGIVING WEEKEND in the autumn of 1994, a lively conference was held at The University of Western Ontario under the title "Conceptual Problems of Relativistic Quantum Mechanics". Most of the eighteen papers in this volume are directly connected with that conference. Articles by both theoretical physicists and philosophers of science are included, and many authors will be recognized immediately for their already substantive work in the foundations of physics. A quarter century ago Howard Stein suggested that relativistic quantum field theory should be 'the contemporary locus of metaphysical research', but there were few takers. Only fairly recently has that changed, with the result that the bulk of the papers here pursue issues that go beyond nonrelativistic quantum mechanics (or at least have serious implications for its relativistic generalization). Nevertheless, problems interpreting the nonrelativistic theory remain a persistent thorn in the side of any such endeavor, and so some of the papers develop innovative approaches to those issues as well.